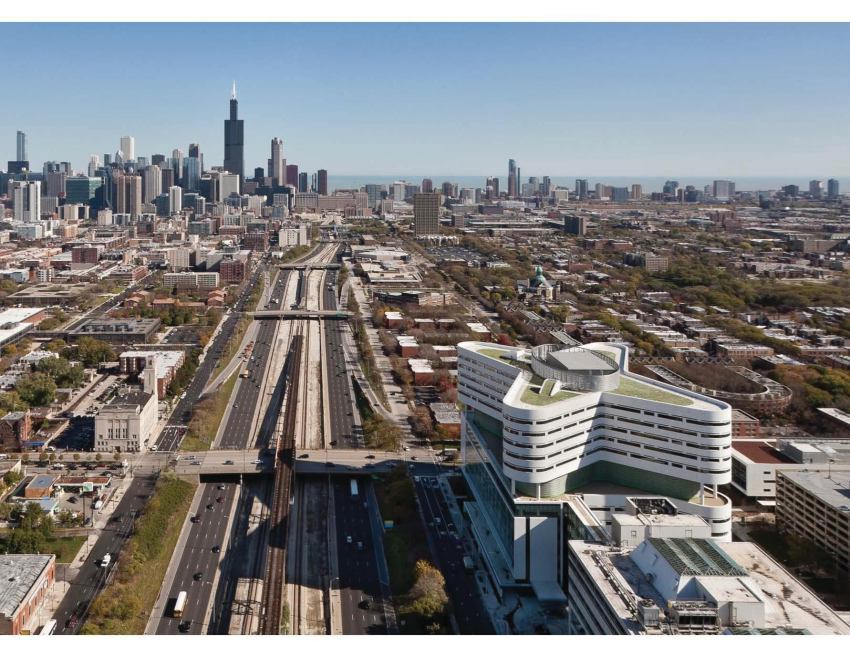 Form follows function in this new Chicago hospital designed by Ralph Johnson of Perkins+Will, and the building’s efficiencies result in an iconic new gateway for the city.

The towers of downtown Chicago are no longer the only architectural landmark on the Eisenhower Expressway that links the Loop to the eastern suburbs. Ralph Johnson, FAIA, of Perkins+Will has designed a new four-petaled icon that marks the entrance to the city. But it’s not a museum, a concert hall, or any other type of cultural institution often associated with this level of expressive form. Instead it’s something far less expected: a hospital. “It’s really a city-scaled civic building,” Johnson says.

Iconic though it may be, the form of the new 800,000-square-foot hospital tower at Rush University Medical Center is actually the result of a relentless pursuit of efficiency. The new building houses diagnostic facilities and 386 patient rooms, and the program very much dictated the structure. The orthogonal six-story volume at the base of the building houses treatment facilities, operating rooms, radiology suites, and the emergency department, and care was taken to share resources between departments wherever possible. “A lot is based on functional adjacencies,” Johnson says. “It’s all predicated on very expensive people’s time traveling from one space to another, and on the safety of the patients.” Patient rooms are housed in the five uppermost levels, which take the form of a four-pointed star. The unique footprint ensures that each patient room is identical, to create efficiency for the staff, while maximizing the amount of exterior wall surface and the number of windows. This allows daylight into, and views from, each patient room. Nurses stations are positioned along the core, and the rounded rooms at the end of each point of the star are left open for lounge and consultation space.

The architects worked hand-in-hand with the hospital during the design process, and took the unusual step of establishing a 25-person office on site, even though the firm is based just a few miles away. The hospital in turn took several department leaders away from their full-time duties to staff the office, ensuring that what might normally be weekly meetings happened on a daily, or even hourly, basis. “Some of the magic of this was to make it feel like people were seamless and working with the same end in mind,” says hospital executive vice president and COO Peter Butler. And nothing in the design was left to chance: When it was determined that the star-shaped layout of the patient tower was the front runner in a series of design options, the team painted out a full patient floor on the site so that doctors and nurses could walk the proposed layout of the hallways and ensure that all operational needs would be met before construction began.

Another design requirement was that the new building had to connect to an existing medical facility. “How this building interfaced with the existing hospital was critical,” Johnson says. This created complexities in connecting new floors to old, but it did allow for a 100-foot-wide lobby between the two buildings. The double-height space is clad in wood, and features what Johnson terms “a reverse terrarium”—a glazed garden courtyard. The lobby can also serve as a shelter in case of biochemical attack: The space can be transformed into a fully functional emergency response area, and oxygen lines and other utilities, including those for decontamination showers, are hidden behind removable column covers.

In short, practically every design move furthers the goal of providing quality medical treatment for patients and a functional working environment for staff. And it seems to be paying off: According to Butler, patient response surveys indicate that metrics are up in everything from quietness to the number of positive recommendations—not only in the new facility, but across the entire campus. And he credits the architects not only for their careful attention to detail inside, but also with creating a new presence for the hospital. “While we weren’t looking to make an architectural iconic statement, that’s what happened,” he says. “We think it’s kind of a magnificent gateway to the city itself, and Rush always wanted to be viewed as Chicago’s hospital.”