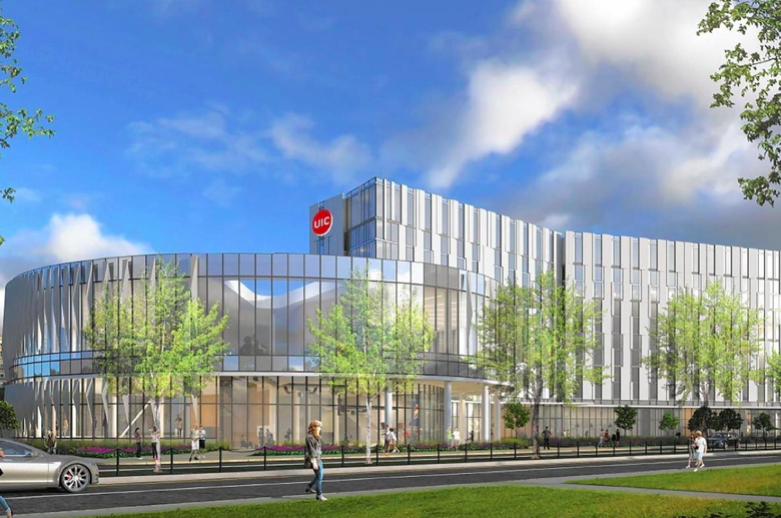 Continuing a transformation from its days as a commuter school, University of Illinois at Chicago is seeking to build a $100 million residence hall and academic complex, which would be the campus’s first new dorm in more than a decade.

The Illinois Board of Higher Education on Tuesday approved UIC’s proposal to construct a 10-story, 550-bed tower at the corner of Harrison and Morgan streets on the Near West Side. The facility would also include a two-story academic wing with classroom and study space, as well as a retail area.

Construction is scheduled to start in December and would last until July 2019.

The development of the 135,700-square-foot facility comes amid a five-year plan to boost enrollment across the three University of Illinois campuses by 15 percent.

The Chicago campus easily recorded the largest percentage increase in new freshman students this fall, in stark contrast to the majority of state universities, which saw declines. The Near West Side campus welcomed 4,064 first-time freshman students, about 700 more than last fall, which represents a 23 percent climb.

J. Rex Tolliver, vice chancellor for student affairs, said the goal of the new facility is to both increase and modernize UIC’s housing.

“This will be a truly integrated living and learning community,” Tolliver said. “The needs of students today are different than what they were 30, 40 years ago. Their expectations are different. We haven’t provided that type of experience at UIC. It’s past time for us to be doing it.”

The project also follows two years of turmoil for higher education in Illinois as state leaders were locked in a budget impasse.

Now, after two years of steep cuts to state funding, the state’s new 2017-18 budget provides public universities with funding akin to what they received in years before the impasse.

The end of the impasse has in turn helped stabilize bond ratings — an important development that helps the university secure better borrowing terms.

Standard & Poor’s took the state of Illinois off the watch list for a downgrade to junk status after legislators overrode Gov. Bruce Rauner’s veto to pass a spending plan in July. S&P also took University of Illinois off its negative watch and ruled its credit outlook to be “stable.”

Joseph Krist, partner of Court Street Group LLC, a financial research and consulting agency in New York, said universities would have had a harder time borrowing for major projects during the impasse because it was difficult to assess their credit risk and their financial situation. The budget agreement “basically stopped the bleeding on the state’s ratings” and creates a more advantageous borrowing market, he said.

“It’s not surprising to see that parts of the university system would be looking to try to finance capital projects now that they probably felt they hadn’t been able to over the last couple of years of the budget crisis,” Krist said. “Because you’re at that point in the credit timeline you feel a little more confident going forward.”

The project will be a public-private partnership with the Texas-based American Campus Communities, a large publicly traded developer of university housing that will secure financing.

The 83,000-square-foot tower will look like a typical residence hall, with a mix of single, double and suite-style units, study and social lounges, residence life offices, a fitness center and laundry rooms.

The remaining 1,700 square feet likely would be a cafe, according to the proposal.

“There will be students who will be able to just get out of bed, go downstairs have a cup of coffee and go straight to class,” Vice Chancellor Tolliver said.

The building would sit near the UIC Theatre, the Behavioral Sciences Building and the Jane Addams School of Social Work, just off the Eisenhower Expressway.

“It will be very visible, and I think it will also send a signal about the strength and vitality of the campus,” UIC Chancellor Michael Amiridis said.

In an interview last week about UIC’s enrollment boost, Amiridis said officials needed to focus attention on its facilities and space to be able to welcome influxes of new students. Tolliver said UIC’s housing occupancy rate is at 95 percent, and some freshman this year had to be housed on the west side of campus where there is more availability.

UIC’s portion of the system’s five-year growth plan prioritizes recruiting more undergraduates — students more likely to seek and require on-campus housing — in order to fill existing and new academic programs to capacity. UIC is aiming to add almost 4,800 new students by 2021, with more than 90 percent of that increase coming through growth in undergraduate programs.

“We need an updated infrastructure. The question was, how do we do it?” Amiridis said. “Bringing the private sector in is the best way to do it because of the problems we have in Illinois. There’s no way we could do this on our own.”

UIC, which once primarily was a commuter campus, constructed its first dorm in 1988, then boomed with three new dorms in six years in the early 2000s. The most recent, Stukel Towers, opened in 2007.