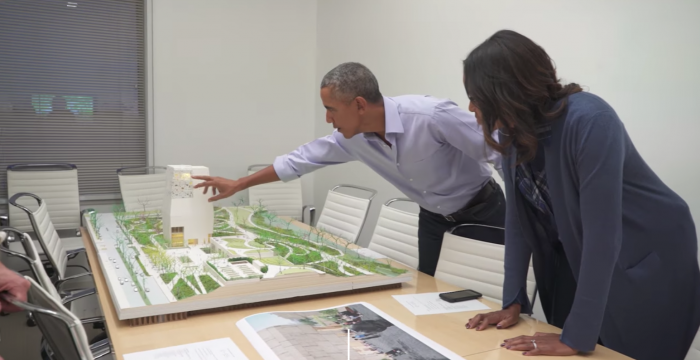 Not since the 1893 Columbian Exposition has the South Side had a real economic and environmental make-over. It’s been over a century since Jackson Park became the  catalyst of innovation, culture, social nobility and economic vibrancy. Black people were limited in their attendance at the Exposition (also known as the Chicago World’s Fair); several were allowed only as low page workers and performers; others, such as Frederick Douglass, Ida B. Wells and Ferdinand Lee Barnett, spoke on social justice, women’s rights and racial equality.

Discussions led by African American leaders took place at these forums sponsored by the World’s Congress Auxiliary of the Chicago World’s Fair but were kept in the shadows of main attractions at the Exposition.

Over the several decades since the Exposition, Jackson Park has retained its beauty from the man-made lagoons and hidden gems, and the community that surrounds the lush landscape has attracted four generations of African American families laying roots in the once-affluent White neighborhood.

President Barack Obama and Michelle Obama’s decision to choose the city’s parkland for the site of the Obama Presidential Center (OPC) has not only brought a fresh energy to the South Side but it has reshaped how neighbors will be forced to accept that change is growth.

There have been several public community meetings and open forums for neighbors to share their input on the development of the OPC, and one of the main concerns from the business community was having a fair process for African-American owned construction firms.

“President Obama has always wanted to use every aspect of this project that we could to have a positive impact on this community. We know that happens in a lot of different ways. One of the major ways that we do that is through economic power. We wanted to make sure that we maximize the opportunity which means more diversity,” said VP of Civic Engagement Mike Strautmanis.

The foundation announced that the Lakeside Alliance would manage the construction of the center. Lakeside is comprised of several firms which include UJAMAA Construction, Powers & Sons Construction, Brown & Momen, Turner Construction and Safeway to form the Presidential Partners consortium.

“That means people of color—Black firms in decision making positions– are having a real seat at the table. Often times you see national firms in the lead with MBE and WBE on the side line as a junior partner. We didn’t want to see that, so we put out this RFP (Request for Proposal) to let people know that diversity was important to us. This group came together on its own to show us they wanted to compete with this project and they turned out to be the best team,” said Strautmanis.

Becoming settled in Chicago, OPC CEO David Simas is excited to be a part of his former boss’ vision.

“The President told me he wanted me to take this job and ‘you need to move to the Chicago and you need to move to the South Side.’ I said, ‘yes sir’,” Simas smiles.  “It’s really an honor of a lifetime having worked with the President for eight years in the administration. Prior to that, I worked for another South Sider, Governor Deval Patrick of Massachusetts, as his Deputy Chief of Staff. So, there’s a lot of passion and I enjoy going into this project.”

Surrounded by senior staffers, Mike Strautmanis and Marty Nesbitt—both native South Siders– along with residing six minutes from the foundation’s Hyde Park headquarters—Simas understands the history and the pride of Black Chicagoans.

“The first congressional district has been represented by an African American continually since 1926. Unlike anyplace else in the country, it gives you that real tangible sense of community. Individual agency and capacity to build an entire facility in place that Marty described as the center of the universe for engagement, action and good. It’s a very distinguishing feature,” Simas recognized.

The architecture and design teams include Tod Williams Billie Tsien Architects Partners and Interactive Design Architects (IDEA) as their partner. Excited about the architectural process of the Presidential Center, a sprawling campus that will be adjacent to the Woodlawn community but in close proximity to the Hyde Park, South Shore communities—Chicago native and President of IDEA Dina Griffin explains President and Mrs. Obama’s vision for the OPC.

The Presidential center is divided into three buildings, but they are connected below grade. The buildings include: the main museum, the forum and the library building.

The shape of the building utilizes different hands coming to together to shape an idea. She said the space will have both ticketed space and non-ticketed space for anyone to enjoy the building, which will include restaurants, cafes, and the auditorium.

“There’s also a contemplative space near the top of the tower. It’s not just reserved for the board members or the President but for the public. We wanted to engage the community and draw them in and that’s why it’s more of a campus layout. There’s permeability through the site to the East to the lagoon and ultimately to the lake and connectivity to the Museum of Science and Industry.

In addition, the campus will feature a community and women’s garden. The South lawn will be a site where concerts and special presentations can be hosted, and, in the winter, a sliding hill can be utilized.  Griffin said the design of the OPC is for visitors “to have visual access” to everything.  “We want you to use the plaza and see what’s going on in the forum. We want you to know this is for your community.”

Listening to the community’s concern of having the parking lot at the east end of Midway Plaisance, the team moved it to the campus site, where it will be underground on the Southeast with access from Stoney Island.

Museum Director Louise Bernard is currently in New York working with the design team and will soon relocate to Chicago this Fall. The museum and library will house important manuscripts from the Obama’s journey, but it will also highlight the significant achievements in African American history.

“The idea of history is obviously very important. President Obama has reminded me and the exhibition design team while his story is phenomenal in so many ways, he’s the first African American U.S. President, his story is connected to all of the those who went before him. He’s very cognizant of this concept of the shoulders of which we stand. We want to be connected to that sense of history,” said Bernard.

As the presidential center takes shape and the community outreach builds steam, programs will be put into place, from hosting various youth leadership training sessions to welcoming the first Obama Summit last December, which brought rising civic leaders from around the world. But, some locals are demanding a Community Benefits Agreement. Strautmanis understands there will be challenges because no one wants to feel left out of the decision-making process.

“I think people have very high expectations. Everybody in our community loves President and Mrs. Obama. They are so excited and frankly there have been a lot of empty promises in the community. In the past when people came, they were going to promise economic opportunity and educational opportunity for our young people and it hasn’t happened,” he said.

Although, the Obama Presidential Center will be based on the South Side providing close to 5,000 jobs and a welcome mat to the community—it is also an extension to what our city offers. The senior team says it will provide connectivity to residents throughout the city and the region, branching out to the world.

What makes this center and library different from other Presidential centers? Strautmanis answers, “What we try to tell folks is that one—President and Mrs. Obama is of this community, so they don’t need anyone to explain to them what’s going on the South Side. They know it. They love it. They’re neighbors—Mrs. Obama grew up here,” he says.

“Two—we want to make sure everyone has a seat at the table. It has a global significance. We don’t want to be in a position to do this ‘business as usual’ where our community impact is just about checking the box.”

Learn more on the progress of the Obama Presidential Center, visit: www.obama.org