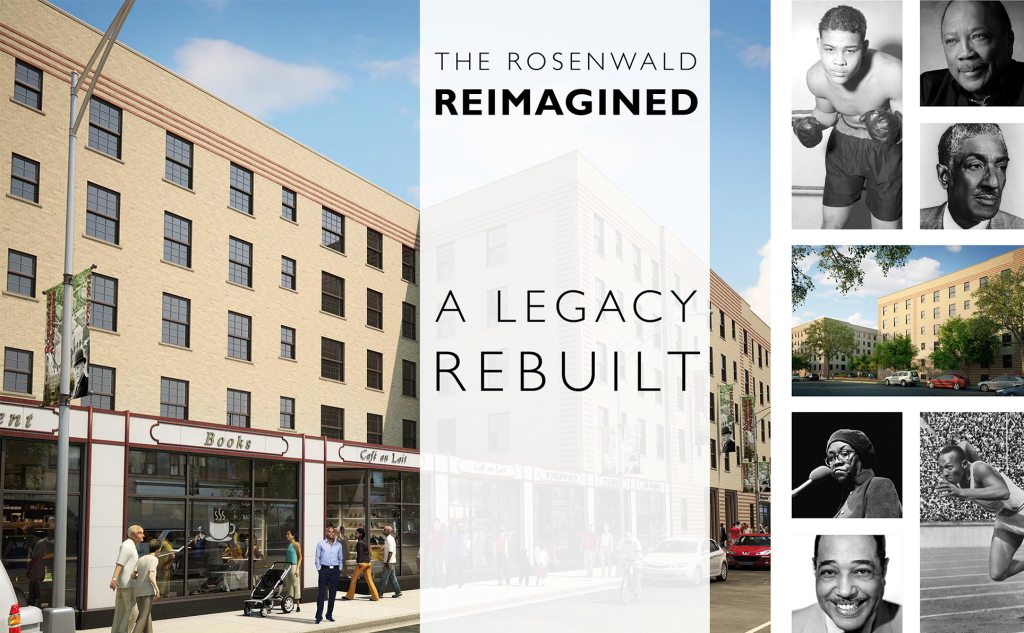 The redevelopment of the building, which is listed on the National Register of Historic Places, will convert the existing 454 unit vacant building covering an entire city block between 46th and 47th, Wabash and Michigan into Rosenwald Courts, with 239 one and two- bedroom units of senior and family housing with a two-acre professionally landscaped interior courtyard. There will also be approximately 40,000 gross square feet of retail and office space along 47th street / Wabash Avenue and three parking lots on Wabash and Michigan offering residents and retail tenants 150 parking spaces.

The building was originally built by Julius Rosenwald, who was inspired by Booker T Washington to create affordable housing with amenities in what was then a segregated community. In its heyday the building was managed by Robert Taylor and housed Quincy Jones, Nat King Cole, Duke Ellington, Jesse Owens, Gwendolyn Brooks, Joe Louis, and Ralph Metcalfe, among others. We would like to give special thanks to Alderman Pat Dowell for her leadership and commitment to the successful redevelopment of Rosenwald Courts.

Alderman Pat Dowell, community groups, and the general public work to cultivate a successful and vibrant community reminiscent of the area’s heyday. The redevelopment of the historic building is a major catalyst for this overall redevelopment of Bronzeville, as it will reclaim the building from disrepair and eliminate its blight on the neighborhood and the 47th Street corridor, create jobs for the community, provide opportunities for neighborhood businesses to grow and create needed affordable housing.

The project will soon begin construction and will be completed in the summer of 2016. The 5-story building, previously a series of 5-story walk-ups is being redesigned to have central entrances with elevators serving the units. Both main entrance areas will include a large lobby, a fully furnished community room, and a fitness room. The existing 3-story walk-ups are also being fully restored. The most significant amenity in the redeveloped Rosenwald Courts is the two-acre courtyard that will be retained, upgraded and improved. In addition, the project includes the Bobbie Johnson Community Room, dedicated to Ms. Johnson’s long and successful fight to save the Rosenwald from demolition.

The developer, a venture between the principals ofIceberg Development, RCAP LP, Lightengale Group, and DR Rosenwald, selected a joint venture of George Sollitt Construction Company, Powers & Sons, and Brown & Momen as the general contractor to undertake the project. The contractor is currently vetting subcontractor bids and expects to award demolition contracts in late January with others contracts to follow. All subcontract awards will meet City of Chicago and CHA requirements. Solis Russell is the owner’s construction representative. ERS Enterprises & Strategic Precision Management are acting as the Compliance and Community Liaisons to coordinate community participation in the subcontracts awarded and community hires. Architectural services for the 5-story were completed by Hooker DeJong, Inc and for the 3-story by John Joyce Architects, Inc. and MacRostie Historic Advisors LLC consulted on the myriad of historic issues. Expert legal coordination was provided by DLA Piper and Charity & Associates. The building will be professionally managed by Mercy Housing Management Group.