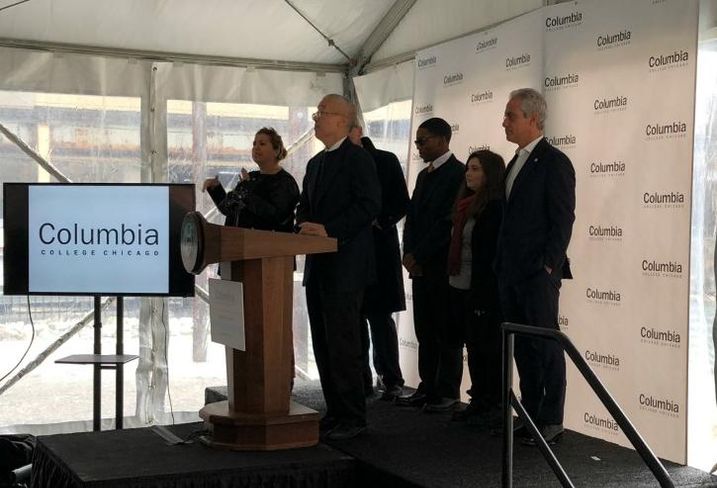 Mayor Rahm Emanuel joined a group of dignitaries and students as Columbia College Chicago broke ground on a 114K SF student center. When the five-story, 114K SF building at Eighth Street and Wabash Avenue is completed in 2019, it will be the first student center in the school’s 127-year history.  Columbia College President Kwang-Wu Kim said building the center was the thing students most asked of him in his four-plus years at the school. The $50M development is funded by the sales of real estate assets owned by Columbia. One of those assets, University Center, was acquired by Blue Vista Capital Management last August for a record-setting $201M. Kim said Columbia is in the process of selling some smaller assets in the South Loop, which will help the sprawl of the school’s campus. Courtesy of Gensler Construction of Columbia College Chicago’s 114K SF student center is expected to be completed in 2019. The student center will tie Columbia’s shrinking campus footprint together. Columbia partnered with Gensler to design the glass building, which Kim said is built around the ideas and work of its student body. The new building will feature integrated spaces for both structured and informal interaction and learning — from analog and digital maker labs to an 800-person event space. Gensler Regional Area Practice Leader David Broz will lead the design team.