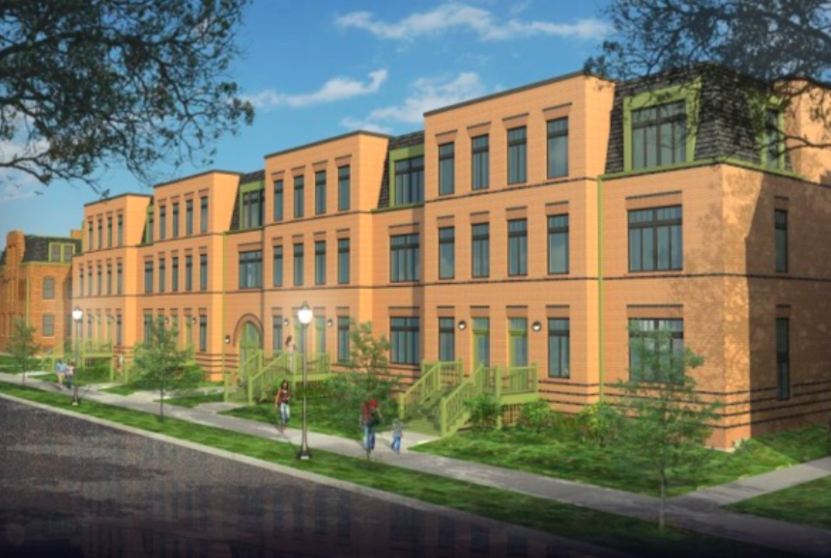 Pullman’s Artspace Lofts Are Leasing Up

The Pullman Artspace Lofts — an affordable, artist-focused housing development slated to open for move-ins in November — is now leasing.

The first new multi-family development to arrive in the Pullman neighborhood in decades, the lofts will deliver 38 affordable apartments and 2,000 square feet of exhibition spaces in an adaptively reused building on Langley Avenue. In return, Pullman is primed to gain a burst of small-scale commercial activity as the lofts’ new residents build their businesses in the South Side neighborhood.

To qualify for a residence, applicants must meet income thresholds as outlined by the Department of Housing and Urban Development, pass a background check, and present their work to an artist review committee (typically composed of three to five people, including members from PullmanArts, employees of Artspace, and other neighborhood stakeholders). However, interested artists shouldn’t be intimidated by the process or feel that their work is being “judged,” says Artspace asset manager Kim Moore.

“[The review panels] are probably the most fun part of our job because we get to interact and meet with the applicant and learn their story,” Moore says. “[They] could live anywhere, but a lot of them want to live in a creative community and network with each other.”

Once an applicant meets all the requirements, they’re able to pick out a unit. A 500-square-foot studio rents for between $625 and $725 a month, while 550-square-foot one-bedroom units cost between $700 and $775. Two-bedroom floor plans range in size from 672 to 1,000 square feet and cost between $850 and $900. All of the apartments boast large, open living spaces, says Artspace community manager Tiffany Johnson.

By the end of August, the team had fewer than 20 completed applications. (Johnson concedes that completing compliance is a “tricky” process.) Among those completed applications are artists from all over the Chicago metro area and beyond. In terms of creative output, all types of artists — writers, illustrators, photographers, dancers, and more — are considered for residencies.

“We had a call from someone coming from the Detroit area, someone from the far North Side of Chicago, two applicants from Waugekan,” Moore says. “It makes the footprint more interesting by not just having different art forms, but having people from the broader Chicagoland region and other cities and states.”

The idea of bringing people from different backgrounds together in Pullman is consistent with the neighborhood’s cultural and industrial history, the Artspace team says. Its heritage as an industrial railroad town is helping to lead yet another rebirth of the area, this one spurred in part by a major investment by the National Park Service.

The surge of attention and investment, of course, could have implications for Pullman’s current residents. Similar developments have been met with opposition by neighborhood groups in Pilsen, namely for courting singles more likely to move in and out of an area than families.

But does artist housing necessarily foreshadow gentrification and displacement? Artspace VP of Communications Tio Aiken says it’s not the same script we’ve seen in other parts of Chicago. “This project is about anchoring affordability in the neighborhood and preserving some of the historic aspects of the property,” she says, adding that Artspace is not in the business of “flipping” their properties — that is, developing, leasing, and then outright selling the entire asset as a turnkey investment.

“We only go into places where we’re invited. Affordable housing is in high demand across the country, but when you have affordable housing aimed at artists, it strengthens the fabric of our communities.”